Once upon a time, there was a non-profit organisation who needed online donations to achieve their objectives. They set up a website, added a simple donate button to the website’s navigation, created a donation form, and watched the revenue roll in.

The strategy worked like magic; the organisation eclipsed their fundraising targets, got to work, and changed the world. Everyone lived happily ever after.

If this reads like a fairytale, it’s because that’s exactly what it is… a fairytale.

Donations are the lifeblood of many non-profit organisations—many receive only around 10% of their funding from the federal government—and online donations are key in most fundraising campaigns. But simply adding a button and a form to your website isn’t going to cut it.

Just like any offline fundraising campaign, it’s incredibly competitive. There are thousands of organisations vying for eyes, ears, attention, personal details and dollars. The competition is high, and organisations that don’t capture attention—and capitalize on that attention—inevitably hit the wall.

So how do you get attention, and convert it into action? The aim of the game is influence. To influence, you must understand what drives the behaviour of potential supporters, and use tactics to wangle a response from hearts and minds: more online donations, more donation revenue, and ultimately more support for your cause.

That’s what this article is all about.

Influencer: The Power to Change Anything.

I recently read a book called ‘Influencer: The Power to Change Anything’. For someone who enjoys applying simple frameworks to analyse and unpack problems, Influencer delivers in spades.

The book combines decades of top-caliber social science research with multiple real-world case studies to present a framework that applies to almost any situation calling for behavioural change.

From individual problems such as losing weight, to the kind of systemic behavioural problems that facilitated the HIV epidemic, the framework casts a wide and varied net.

Which got me thinking: can we use this framework—or at least part of it—to help our non-profit clients prompt greater support from prospective donors? To answer that question, we’ve got to ask two more.

There are two essential ingredients in influence:

For example, if someone asks you to grab a coffee at a new café in the city, you first have to want to go. If you find the city too busy or you simply don’t like coffee, you’re probably not going to be motivated to go.

If you do want to go, but you have an important meeting on, or your car’s broken down, or something else is in the way, then you may not have the ability to go.

Online donations are no different. For any potential donor sitting on your website, they’re likely pondering two important questions:

If the answer to either or those questions is ‘no’, then guess what happens? Nothing.

You can influence this potential donor; you can ensure the answer to both of those questions is ‘yes’; and you can do it using the content and functionality on your website.

So how can you engineer a better outcome? Use the six sources of influence.

The six sources of influence.

According to the book, Influencer, there are six sources of influence that consistently effect our decision making.

Motivation and ability remain at the core, but each of these can be further broken down into ‘personal’, ‘social’ and ‘structural’ categories, giving us six sources of influence.

Here’s how they’re broken down:

Not surprisingly, there is no single source of influence that’s universally effective in every situation. There’s no magic bullet for influencing your audiences.

Let’s look at the six sources of influence in detail, along with some examples of how non-profit organisations use them as tactics to increase online donations.

What’s the most obvious way to get someone to do something? Make them want to do it. Pretty simple. In theory.

Personal motivation is all about making the undesirable more desirable.

This impulse lends itself particularly well to website copy: the way you talk about your audience and your initiatives can be a powerful motivator for prospective supporters. Try using emotive language to articulate the enormous benefit every single donation facilitates; make your supporters feel empowered and essential. Valorize each and every contribution, regardless of size.

Amplifying the impact of someone else’s potential influence can be a powerful source of influence in itself.

Provide evidence of how a donor’s money is actually used, and reiterate how each donor is a crucial ingredient in facilitating that outcome.

Amnesty International use this source of influence particularly well, with strong copywriting and information about how revenue is used. On their donation page, each monetary amount is linked to a tangible outcome—$20 can provide ongoing human rights education programs around the world. 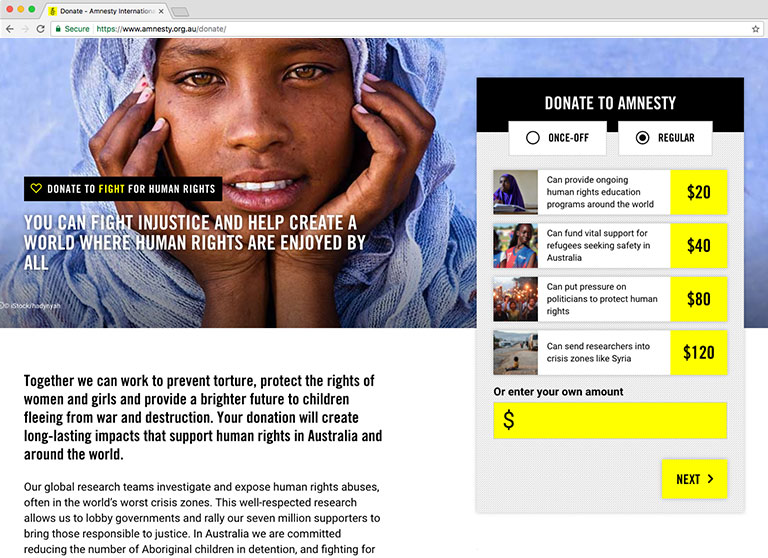 Note the dollar amounts and the accompanying text in the donation module on the right side of the screen (via Amnesty International).

As we learned earlier, people must have the ability to perform a task. They must have access to money, or it’s difficult to donate.

Alternatively, they must perceive a donation as being within their capability. Note the tiered donation amounts automatically suggested in the Amnesty International example above. A minimum donation amount of $50 or $100 may act as a barrier, even if it’s merely the suggested amount—people may not be able to afford it, or may associate $50 as being too expensive.

People also need an understanding of ‘how’ to donate. Your audience must be able to confidently navigate your site and achieve specific goals. Use simple language in call-to-action copy. Strive for ‘outside in’ terminology; don’t assume people are familiar with industry-specific language or references.

Equally, if someone finds a way to donate, but sees a monetary amount as being beyond their capability, give them other options and alternative ways to contribute. The Nashville Zoo does a great job of encouraging donation and supporter participation, regardless of your means: 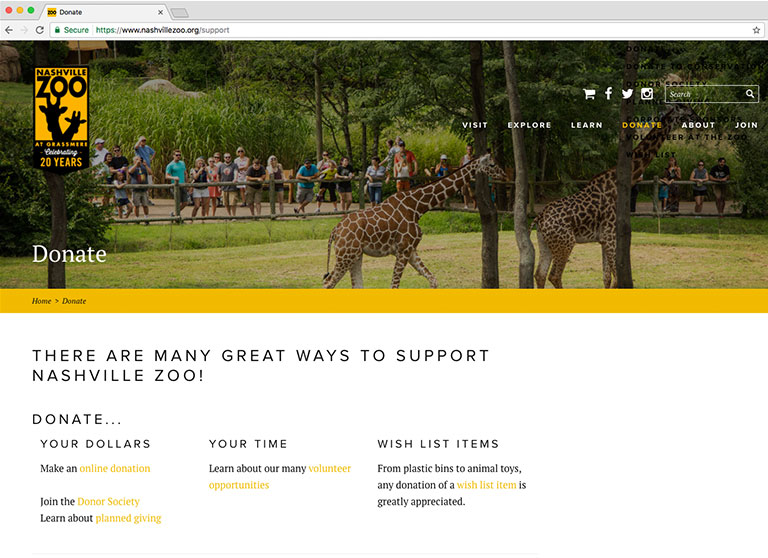 Go on, give in to peer pressure; everyone else is doing it.

In all seriousness, if there is evidence that someone else is doing something, it can be compelling to engage in that behaviour too. It’s especially effective if the original person is someone you actually know.

The number of people engaged in a behaviour can be a powerful incentive too.

For example, if 1000 people are donating to a cause, it’s usually going to be more compelling than the story of 100 donors. This insight is particularly effective when coupled with personal motivation, or ‘values’. If 1000 people have donated and they all have the same values and belief systems as you, that’s a pretty powerful story.

So how does that story play out practically, on a site?

Freedom United have a video on their donate page highlighting why other supporters have joined the movement. The video explicitly articulates the power of joining a group. When you sign up for monthly contributions to become part of Freedom United’s collective consciousness:

‘Becoming a Freedom Founder means you become a member of our team.’

You’re not just contributing to the movement—you’re becoming a part of it.

This is the idea that ‘we work better together’. It’s closely tied with social motivation.

On a website, this source of influence is more about creating an environment where people can encourage each other to get involved with a specific cause or activity.

Functionality like ‘share with a friend’, or ‘match my donation’ provide the ability for others to make a contribution and help a donor achieve the level of contribution they’re looking for. It can also help in recruiting new advocates for your organisation by tapping into the personal networks of your existing supporters.

For example, conservation.org have a corporate partner, SC Johnson, who match any individual donation. If you can’t afford much as a donor, but you still want to contribute to a cause, this is a powerful incentive to get involved: increase the impact of your donation. 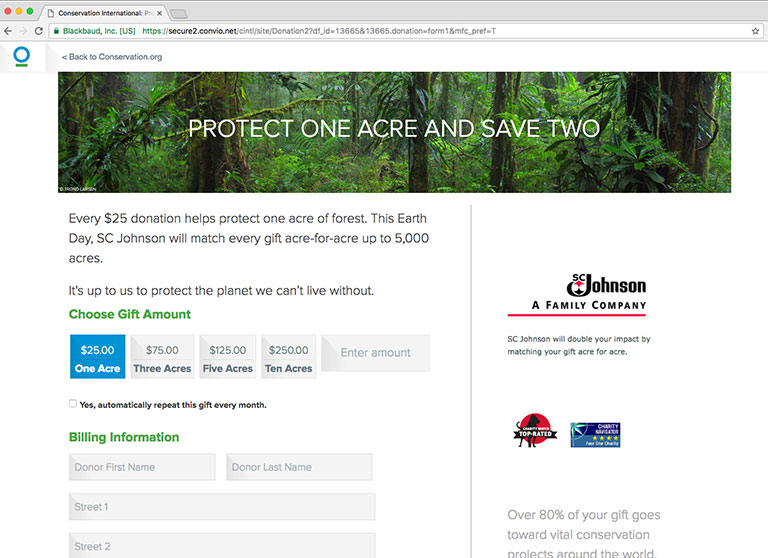 Doubling up with a matched fundraising partner can boost your prospects for donations (via
conservation.org).

Incentives are a huge aspect of influence.

People love receiving things: whether it’s the feeling they’ve made a real difference for the world, or a free keyring.

Just like in any other situation, incentives can be powerful motivators on a website. You could provide a digital incentive in the form of a unique donors-only download, or a badge the donor can share to their social media profiles to promote their generosity.

You could have a ‘featured donor’ with a personal profile on your site’s homepage—think about what appeals to your audience, or what you can offer them, and get creative.

The World Wildlife Fund offer gifts you can choose matched to the tier of your contribution. 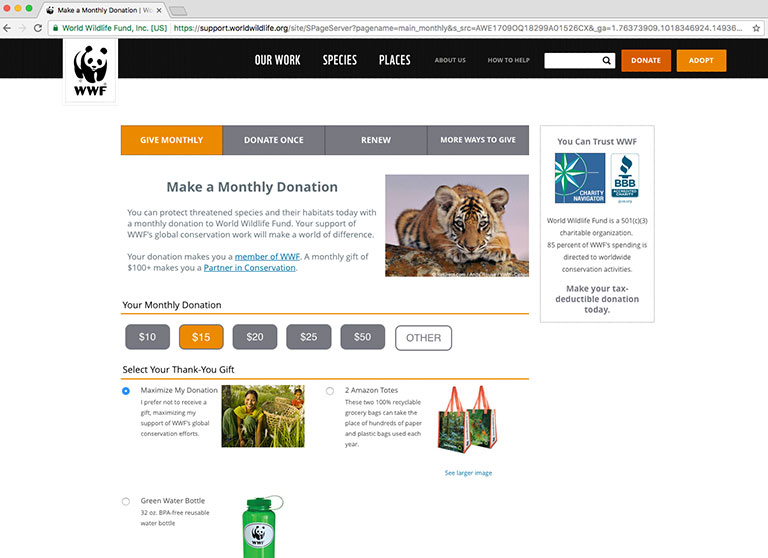 Choose your gift when you sign up for a monthly donation (via WWF).

When you create an environment that’s structurally conducive to a certain behaviour, it’s much more likely that people will engage in that activity. This is the concept of ‘environment’ as a source of influence.

People are more inclined to dance at a nightclub than in an office, because of the lights, music and architectural layout of the space. Depending on your office.

Ikea have famously used a number of questionable—or genius—interior design tactics to facilitate higher purchase rates. For example, there’s only one way to navigate their showrooms, regardless of what you’re looking to purchase; this disorients you, delays your gratification, and makes you more impulsive generally once you get to the checkout area. The environment is conducive to a specific set of behaviours and impulses that make you more likely to buy a new ‘Oltedal’ or ‘Selje’: I imagine it draws on a few of the six sources of influence in doing so.

Your website is no different. Every aspect, every element, and every interaction can be designed to encourage, or discourage, certain responses. Donation forms are a particularly interesting space in this regard.

Optimising a donation form means making it easy. Here’s how:

Live Strong’s donation form is incredibly easy to fill out, with features like auto-credit card detection, conditional form visibility with additional fields only appearing based on your previous selections, and more.

The six sources of influence provides a powerful framework for thinking about almost any behavioural change problem. Encouraging online donations is no exception.

If you work for a non-profit organisation, think about each of these six sources and see if you can identify any weaknesses—or opportunities—in your current approach to fundraising.

And if you don’t work in a non-profit, remember this framework can be applied to almost any influence problem. If you’re looking for a raise at work, struggling to improve the performance of your team, hoping to increase newsletter signups, or simply want your kids to eat their vegetables, try using the six sources of influence to nudge behaviour towards your desired outcome.

How to optimise your blog posts with Yoast SEO.