January 29, 2016 was a buzzing day in Melbourne, Australia.  Above All Human (AAH) brought together 1,000 change-makers for a day full of innovation stimulation. #AAH16 trended worldwide on Twitter. Inspiration vibes transcended the stratosphere.

All sounding like it could be a little wishy washy? I was pleasantly surprised it wasn’t. The conference was a unique opportunity to learn from a well-curated selection of speakers. Topics ranged from astrophysics to digital activism, and even the use of game mechanics to drive online product loyalty. All with the key theme of keeping things human-centric in the development and execution of ideas.

Here are my key takeaways and observations from the day. I’ve already started using them and they’ve helped me to find a fresh approach to problem solving, idea generation and business strategy.

Emerging themes included how radical innovators break down institutionalised ways of doing things, as well as the role design can play in propelling products to success. AAH was set up to blow minds from the outset, and it didn’t disappoint. Attendee numbers were double that of last year’s inaugural conference. Over 1,000 humans packed out the well-appointed City Road venue, with the energy almost palpable and multiple devices in tow. It wasn’t unusual to see two mobile phones, an iPad and a Moleskine writing pad balanced across laps in the audience.

2. Achieving the impossible – (almost!) gender parity at a tech conference.

There was a distinct ‘start-up’ flavour to the attendee demographic. Refreshingly, organisers say that approximately 50% of delegates were women. Likewise, there was gender parity in the speaker line-up: no mean feat for a technology conference.

As a quick snapshot:

The gong for most hard core tech-talk goes to Window Snyder, Chief Security Officer at Fastly. Her top tips on security for start-ups were well received, and she did a good job of keeping the crowd engaged after lunch. It was great to see so many veterans of the digital and innovation industries in Australia in attendance. What also struck me was how many of them were looking up, glued to the speakers and absorbing the presentations in real-time, as opposed to the head down, blue-faced-device-glow of many of their younger counterparts.

NB. Twitter was used to question the speakers during Q&A’s however, so some screen time was compulsory at points during the day, and ultimately all was forgiven.

Some of Window’s security tips: 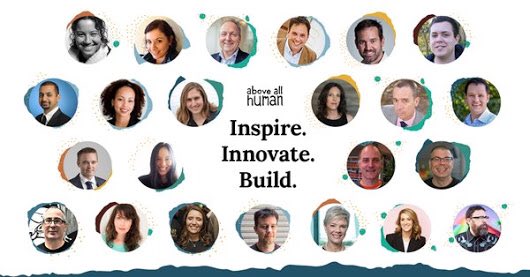 3. Speakers are rarely *all* this good.

It’s not often that you walk away from a conference impressed by every single person that took the stage. The depth and breadth of the speaker line-up was inspiring. Kudos to the organising committee for getting on board the likes of Slack, Fastly, Medicines sans Frontiers, RedBubble and Xero.

One of my personal highlights was Katie Mack. Mack is an astrophysicist. She provided an interstellar perspective on focussing in on the things you can affect. Her key takeaway was to ‘stop worrying’. Broader messages like this appeared to resonate with the audience of designers, project managers, start-up founders and industry veterans alike.  We’re often guilty of worrying about things we can’t control, and allowing that to divert our focus from doing good work and being good humans. Other speakers such as Mule’s  Mike Monteiro received a standing ovation for his witty, to-the-point assessment of what he described as the ‘new design paradigm’. This is the long aimed-for goal of business owners and investors understanding that good design makes good business sense. Monteiro stressed how ill-prepared we actually are for this shift as an industry. His key take-away was to ensure that we teach designers to tie business goals to all of their decisions.

Another point was that organisations and commissioners of work must invest the time to educate designers on how to succeed in our organisations – things we can take for granted such as how to be effective, which stakeholders to engage and even how to navigate internal politics in order to deliver better outcomes. He emphasised that we must ultimately hire designers that know what questions to ask. And if they don’t know, it’s our duty to teach them.

Essentially, you have to be willing to invest in design experience, or invest in the expense to train designers. Otherwise you’re wasting everyone’s time.

Monteiro was also pretty keen for young designers to stay the heck away from start-ups. There may have even been an expletive or two around that particular statement, for emphasis. He doesn’t believe design school graduates are experienced enough to make the design calls needed in these environments, and that poor design decisions can irreparably damage a new concept, or even risk killing a start-up.

This reminded of me the old adage:

“The execution of the idea is more important than the idea itself.”

‘There is a fifth dimension beyond that which is known to man… It is a dimension as vast as space and as timeless as infinity. It is the middle ground between light and shadow, between science and superstition, and it lies between the pit of man’s fears and the summit of his knowledge. This is the dimension of imagination…’ – Opening narration from The Twilight Zone.

AAH’s City Road venue became this new dimension of imagination for a day. The multiple areas in which to convene and talk shop were well managed and well-spaced throughout the venue. The whole place inspired conversation, and despite the push of humanity it never felt over crowded.

The mix of quiet spaces and exhibition/sponsor space was also managed well, and the inner venue seating was comfortable and well arranged. Comfort, when you’re sitting down for long periods, is important. Even the auditorium chairs were comfortable and had decent, real human-sized gaps between them with room for all your stuff, leading to a more focussed, contented audience than I’ve seen in recent times.

The only downside? There was great Melbourne coffee being served, but the lines for the carts were longer than those at a nightclub (or make that, popular breakfast venue in Melbourne). I overheard several people complaining they were missing a speaker they wanted to see while waiting to obtain their caffeine hit.

I guess it’s about priorities (yours, not the organisers’), but a self-service regular drip-coffee stand might help alleviate some of the bottlenecks in future for those that just need a quick hit, and not a fern-decorated soy de-caf flat white masterpiece.

Conference food oftentimes can be meh. At AAH the food was simply fantastic – fresh cooked paella or South Melbourne Market dim sims anyone? Big boxes of fruit dotted the venue so you could stay nourished throughout the day. In fact, hanging out ’round the fruit boxes had that watercooler vibe. Great interactions over an apple or shared feast added fuel to lasting connections. 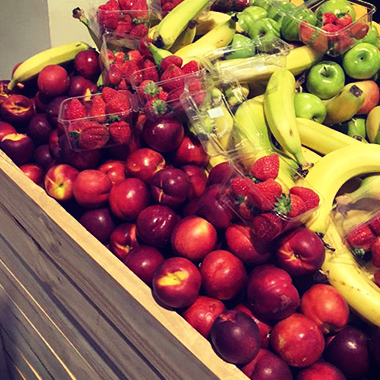 Hat tip to Slack for manning the water stations and providing possibly the coolest snacks of the day (rocket cookies).

6. Get comfortable with pain.

Last but not least, my final highlight was Star Simpson, a programmer and electrical engineer, who managed to leave many attendees squirming in their seats. She stressed the importance of using an acute sense of pain and dissatisfaction to hone and refine your thinking. That by being uncomfortable with the world, wanting to make it better, we can better identify the problems to be solved.

“If necessity is the mother of invention, then frustration is the father.”

Simpson’s presentation on ‘Why building new things is important’ hit the mark in terms of defining new ways of thinking about the world, identifying problems and how to go about solving them.

Her comment that ‘The style about which you go about doing things, matters almost as much as what you’re working on…‘ got some serious Retweet love for good reason. An advocate for using your own impatience, discomfort and irritability to inspire new ideas and solutions, Simpson also provided two good book references to motivate different ways of thinking:

On Looking: Eleven Walks with Expert Eyes by Alexandra Horowitz

This book encourages us to challenge what it means to observe: to see the richness contained in the everyday. To practice, as Sir Arthur Conan Doyle put it, ‘the observation of trifles.’ The author takes a diverse range of experts including an urban sociologist, an artist, a geologist, and a sound designer on a walk around her neighbourhood to uncover fresh ways of viewing the world, and examine how our personal experience shapes what we see and what meaning we take from it.

Harold and the Purple Crayon by Crockett Johnson

Simpson also encourages us to tap into our inner child by reading this classic children’s book.  It inspires imagination and encourages you to create portals into new worlds, and to discover new ways of looking at things. We can all benefit from thinking like Harold.

And so the day was done. The conference spurred curiosity, prompted innovative thought and imparted valuable knowledge. Designers, business owners, project managers… people, humans in general – I’d argue that we all have an innate need to grow and learn and progress. By meeting those needs in full, ‘Above All Human’ was exactly that. I definitely recommend that you check it out next year.

In fact… I wonder if they’re taking early registrations… 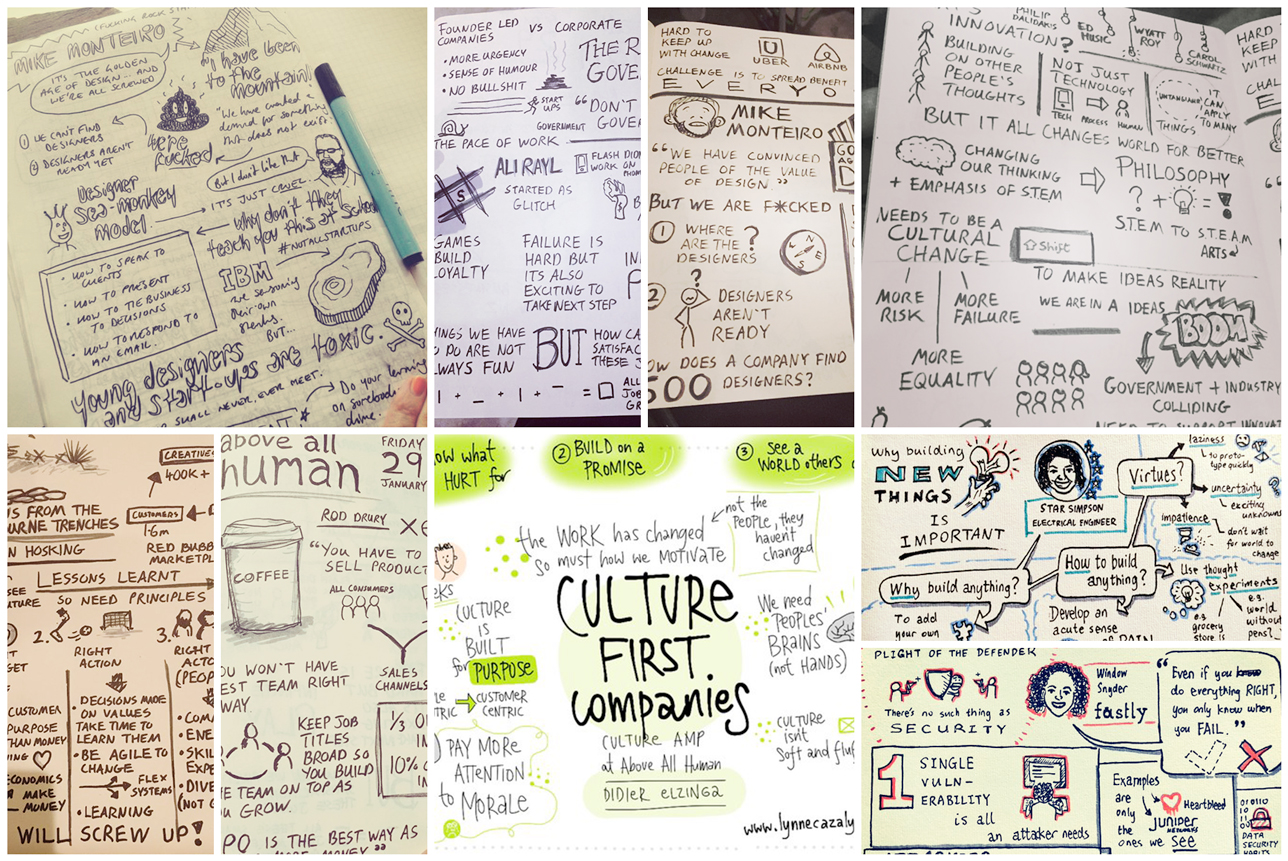 (If you’re looking for inspiration in the meantime, check out these cool visual notes from the various presentations… Click image to enlarge or view the photo feed.
Image credits: @jonneyyeates @lynnecazaly @jcfiction @hmmcdougall)