Last month, Warren, Sarah and I attended the design conference Sex, Drugs & Helvetica (SDH). In similar format to previous years, six speakers gave us an insight into their business and a specific project.

The conference is held in Melbourne and Brisbane with the same speakers delivering presentations at both events.

With a smaller number of speakers compared to other conferences, the format gives the presenters and the audience a chance to really understand a project or case study, delve into specific problems that were solved and time to ask questions.

It was awesome to get away from the desk for a day and be able to revisit the concept of “why we design”. The presenters had some simple tips and points that designers can sometimes forget or overlook when we dive into a project. SDH was a chance to remember these points and put things in perspective.

I’ve put together some of the highlights I took away from the event. In particular, I’ve focused on two presentations that stuck with me and then have included some more takeaways I just couldn’t resist leaving out.

If you attended SDH in Brisbane or Melbourne this year and want to add some of your thoughts about the event, pop them in the comments below, I’d love to read them!

So how did the day play out?

Kicking off the conference was Ben Miles from Interbrand who spoke about the process behind the rebrand of Sky New Zealand.

Next up, we had Nick Cox from Project of Imaginations (POI). He gave us an insight into the development of Supernormal and Supernormal Canteen.

After lunch was Zoë Pollitt from Eskimo. She spoke about the Eastland shopping center rebrand.

Then it was our co-founder, Daniel Banik’s, turn. He talked about the Schools Water Efficiency Program (SWEP) and the impact it has made on schools all over Victoria.

After a quick afternoon tea and coffee refill, it was time for the last two presentations of the day. First up was James Greenfield from Studio Koto. He talked about Airbnb and the process behind the rebrand.

Then to finish the day off we had Cheryl Heller, who spoke about her first Master of Fine Arts (MFA) program in Design for Social Innovation at NYC’s School of Visual Arts. It was nice to have her presentation last because it rounded out the day with a reminder to redefine what success is in a way that is sustainable for the planet.

Each speaker gave us a unique experience. Not only did they talk about the outcome of their projects, but also a sneak-peak of the behind-the-scenes process.

The two presentations I’m focusing on in this wrap up were from Ben Miles and Zoe Pollitt.

This project was an amazing transformation. Sky New Zealand started off as a brand that demanded viewer attention but wasn’t getting any. After receiving a makeover, the brand began to encourage and accompany its viewers to join them on the exciting journey of entertainment.

Throughout the excitement of the presentation, I was able to pick up from Ben some interesting pointers.

As designers, our job is to not only make things look pretty, but to also convey something (whether it be a message or a story) to the audience.
As Ben said, people enjoy nice things, and things that look good. But there is a point to be made that people will enjoy something more if they understand the meaning and reasoning behind it.

Endorse brave clients. Clients who question our ideas and push for more.

It’s never a good feeling when clients shut down your ideas and ask for something else.  A new direction can turn out to be the better direction, which might not have been discovered without the client’s push for more. Ben highlighted some of the client meetings they had with Sky during the project and it was a great opportunity to hear how Interbrand handled those conversations. What could have become a negative client relationship, instead became one full of growth and new ideas.

If a brand is a person, bring it to life. What is brilliant about it?

I don’t know about you, but I think this is one of the best pieces of advice I have ever heard.

As an illustrator, I try to connect with my work, which I’m sure we all do. Whenever I’m designing something new, I befriend the characters I design and try to understand them as if they were real people. What’s their personality like? What do they like and don’t like? By doing this, it gives me a better understanding of the characters and, therefore, when I create them, I am able to give them a specific voice so others will understand their personality as well.

This can also apply to brands. I totally agree with Ben that we should see brands as people. It’s a way to not only create a personality for a brand but it also helps to clearly express the voice and character of the brand. If we can do that, then it makes it easier for people to recognise and connect with the brand.

This last point pretty much sums up the transformation of Sky New Zealand. The makeover gave the brand a personality that made people enjoy it more and want to reconnect with it.

The Eastland shopping center rebrand was a very interesting project to learn about. From what Zoë mentioned, the shopping centre was getting rebuilt (and still is) and needed a new brand personality to go with it. The end result was chic, edgy and modern.

Your relationship with your clients is going to be very important for the future.

Zoë emphasised the idea behind building a positive relationship with your clients. She explained how the result of this landed her and her team the Eastland project. While this concept might not be ground-breaking, it is certainly a key factor in business and one that is vital for business success.

Zoë talked about the process called the ‘Knowledge Funnel’. It is a process that allows people to tackle big or difficult tasks by breaking them down into something that is simple to understand and take in. The Knowledge Funnel is made up of three stages: Mystery, Heuristic and Algorithm. 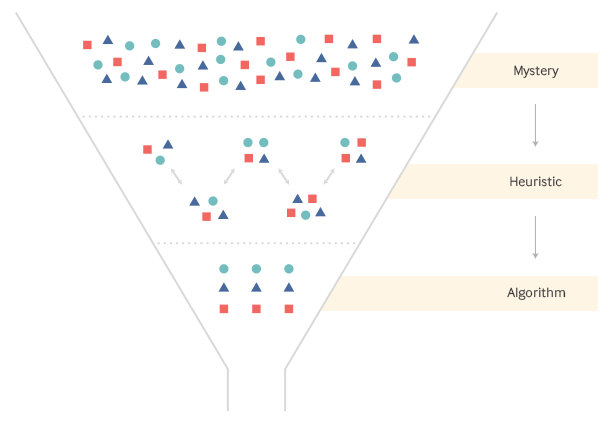 Mystery: the very first stage is to explore the problem, understand all the ins-and-outs of the issue and investigate it.

Heuristic: take the problem and narrow it down to something you can understand by using ‘the rule of thumb‘ method.

Algorithm: This is the last stage. At this point you should be able to convert the heuristic approach into a fixed formula, turning complexity into simplicity.

I think using the knowledge funnel approach to any work can help us break apart something we might initially find difficult and overwhelming.

This is a good approach for anyone who feels overwhelmed by a complicated task. I have taken this process on board and I too find myself feeling more in control of a task and being able to look beyond the complexity by digging out the simplicity at its core.

By the end of the day, our heads were brimming with inspiration, ideas and questions. There were so many great points from the presenters throughout the event. I’d like to share few more highlights from some of the other speakers.

Nick Cox said, “try not to get attached to your clients”. Now I know that probably sounds contradictory to what I just covered off in Zoë’s presentation, but stay with me for a moment. I think the key point of Nick’s comment was that we should still have a professional relationship with our clients but to not get too emotionally attached if things don’t go according to plan. So in a way, Zoë’s comment about your relationship with clients being very important in the future connects with Nick’s comment in the sense of maintaining perspective and keeping an eye on the bigger picture.

Even though SWEP was a project from home, I still found new knowledge in Daniel’s comment “you can’t remove complexity from a system, you can only transfer it”. Sometimes there’s a client project you wouldn’t immediately think of as sexy, fun or beautiful. But that’s where the opportunity is! We can always be looking for ways of how we can take the information or problem and neatly distribute it so it is easier and friendlier for people to digest. Through that work, we can make it beautiful and showcase information people may not have seen before.

If there were two philosophies that resonated with me during the conference, it was one from James Greenfield and the other, from Cheryl Heller.

James said, “a logo is a good one when you can draw it in the sand with your big toe”.

Yes. Simplicity at its best.

James went on to speak about the Airbnb logo and despite all the memes out there on the Internet (you know the ones I’m talking about…), the logo is beautiful in its simplicity and is easily recognised worldwide.

When I first saw the logo, I’ll admit I had my own interpretation of what I thought it looked like, however once James explained the symbolic meanings behind it, I began to really appreciate the logo’s shape and design. You can find out more behind the story of the logo here.

The second beautiful piece that resonated with me came from the very last presenter of the day. Cheryl said that, “the plain fact is, the planet does not need more successful people. But it does desperately need more peacemakers, healers, restorers, storytellers and lovers of every kind. It needs people of moral courage willing to join the fight to make the world habitable and humane. And these qualities have little to do with success as we have defined it.”

These words are honest, raw and clear. The world is in need of a lot of different kinds of people and it’s essential to keep this in mind – no matter what you do for a living or for fun. Be you. We’re all creative and we can all make a change that helps others.

And that was that.

Another year of insightful knowledge from Sex, Drugs and Helvetica. I cannot wait to see what they have in store for 2016. I’m sure it will be another exciting year!