I’m in my late thirties, just old enough to remember the early days of the web. Dial-up internet, AOL, chat rooms, Napster. Having to ‘take turns’ on the internet with my brothers. And the fact that almost every website you visited looked different. Really different.

The reason they looked different is because there was no rule book. ‘UX designers’ weren’t really a thing.

Anyone who had access to a computer and a basic understanding of HTML (or even worse, Flash) was almost totally free to design a website in any way they desired.

People were creatively unshackled, the only boundaries being their imagination. Which is why we ended up with the diverse web aesthetics of the ’90s: 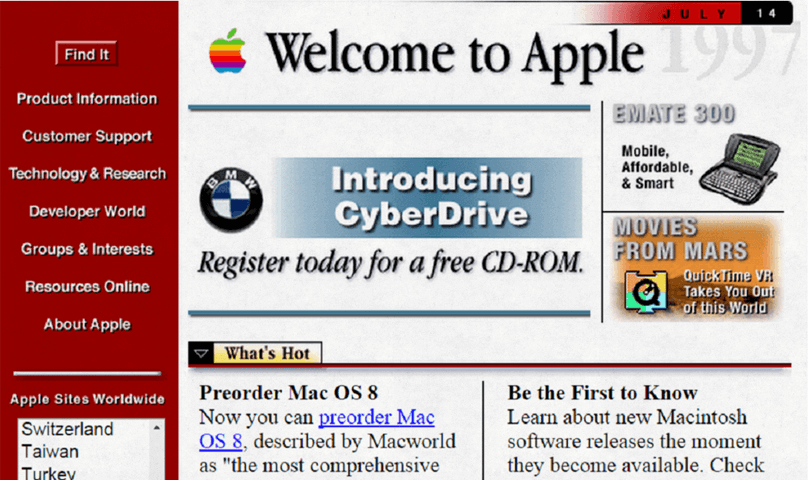 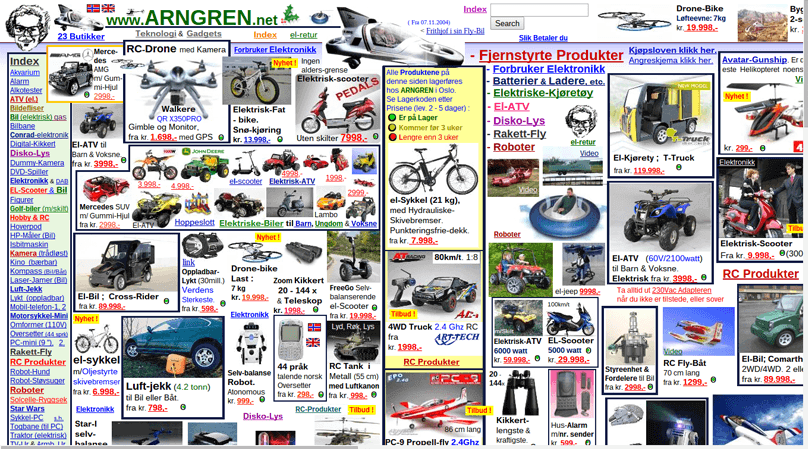 The best thing about this website is that it’s still online! Check out this classic in action.

The problem? These websites were horrendously hard to use. We want our websites to perform the best they can: to drive more leads, revenue, donations, or fans.

Over the years, designers collectively learned that user experience is key to achieving strategic or usability goals. And equally key in avoiding ’90s aesthetics.

One of the main ways designers look to improve user experience is observe successful solutions and apply similar thinking to the development of new digital products.

Over time, these observations (among other, more scientific things, like user research and quantitative insight) have developed into ‘best practices’: conventions around how websites should be built.

The problem with conventions is that everything starts to look the same. 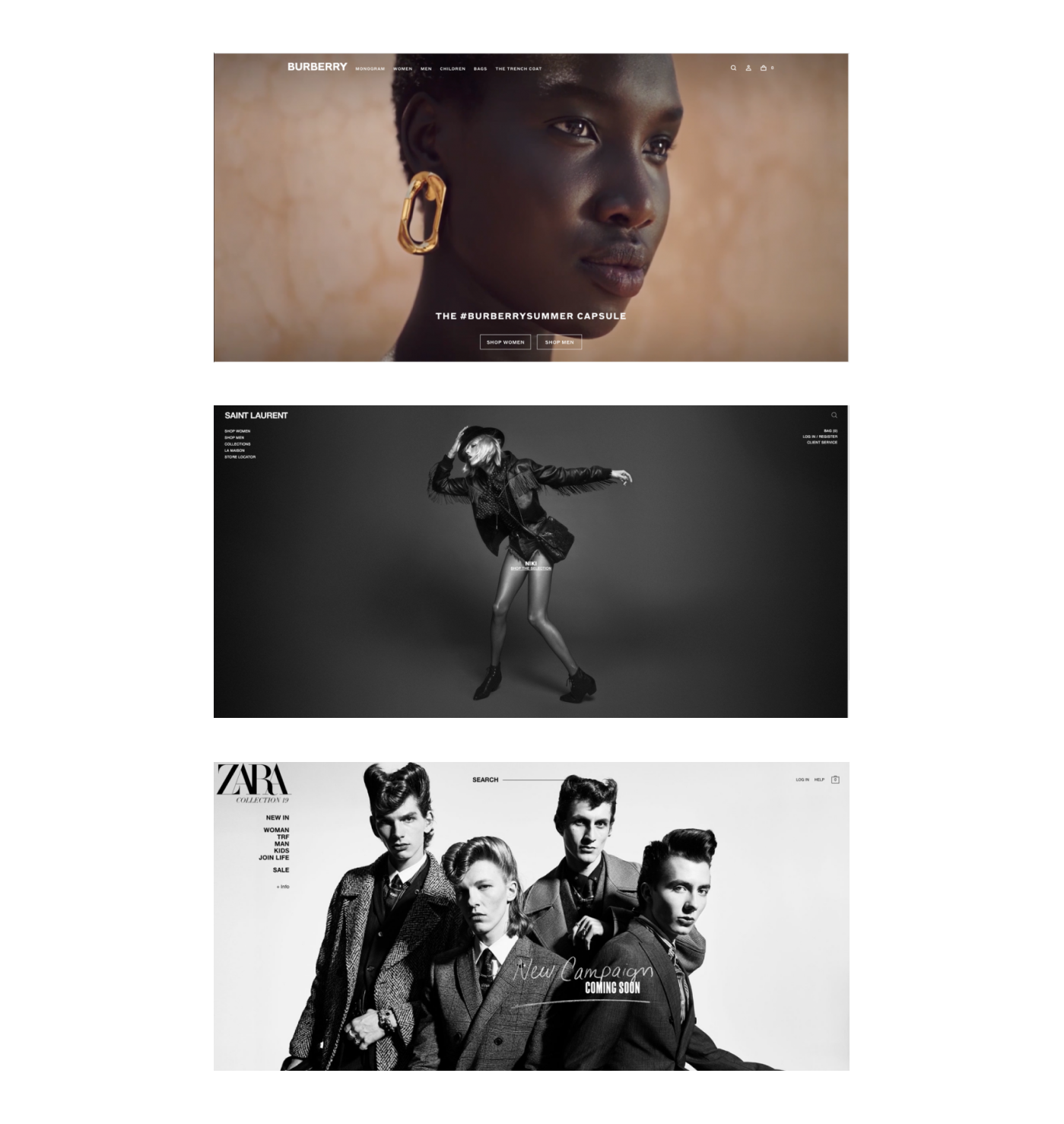 These are the homepages for Burberry, Yves Saint Laurent, and Zara (at time of publication). Two luxury brands and one ‘fast-fashion’ retailer. However, if you swap around the logos, all three sites are essentially interchangeable.

Yes, you could argue that Zara is attempting to position itself as affordable luxury next to the likes of Burberry and Yves Saint Laurent. But in the same breath, you could also suggest that fashion websites generally emphasise a particular product, lifestyle, and attempt to evoke certain feelings. Many choose to do that the same way: big image, small menu, bold first impression.

Or, from a branding perspective, there’s the ‘Calibra’ logo:

While this is an example from the realm of branding, it’s one that speaks to sameness posing a problem for both organisations and people. As this piece from Fast Company explains, this logo fiasco caused problems on multiple levels.

Libra is Facebook’s new pseudo-cryptocurrency, launched earlier this year, accessible via a Facebook spin-off company called Calibra. Calibra’s logo is a tilde, or a ‘~’ symbol, which is nearly identical to another bank called ‘Current’ that was launched in 2016.

The twist? Both logomarks were created by the same agency. Rinse and repeat.

Or, from a hardware product perspective, take this: 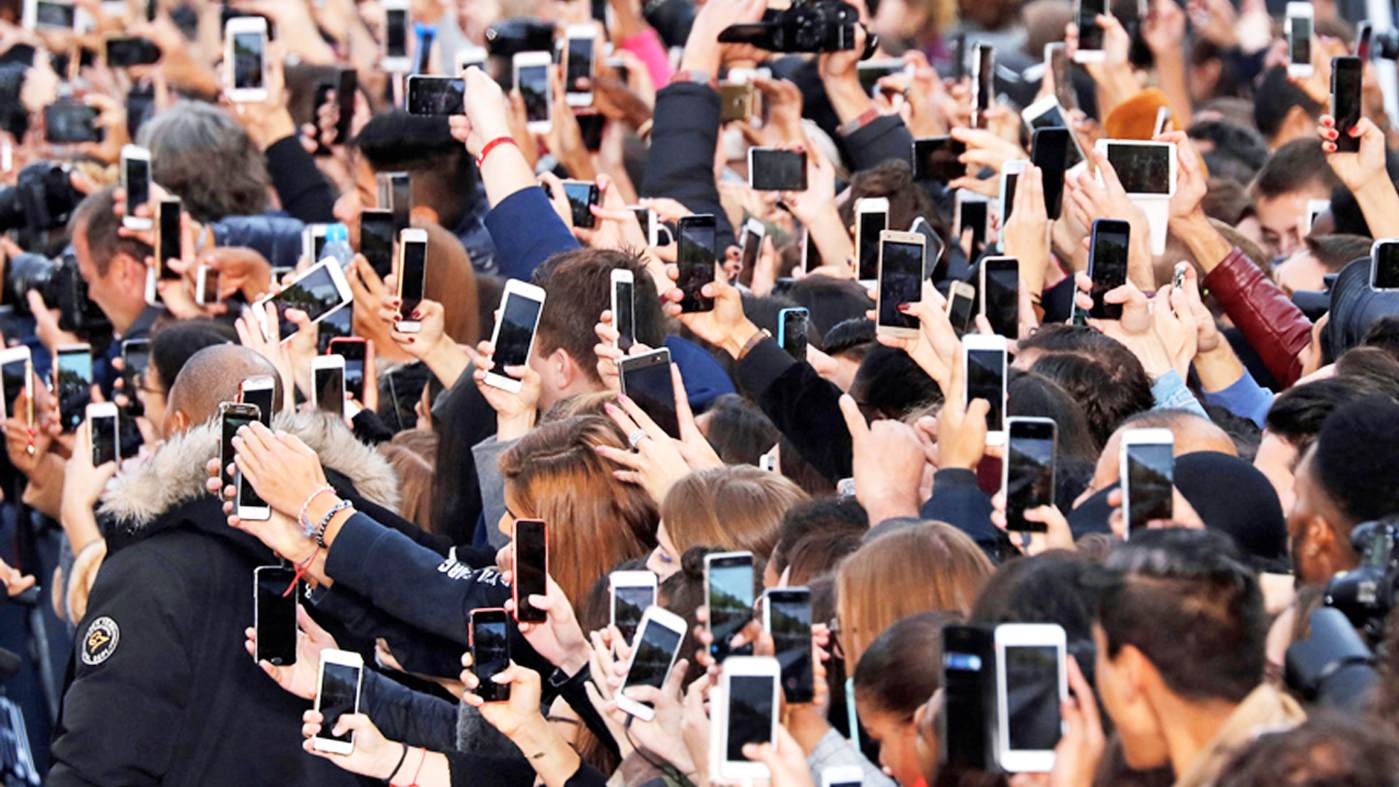 When it comes to smart phones, there’s never been more options that have looked so similar.

I remember when mobile phones were diverse in both style and functionality. But these days, even though smart phone manufacturers have been trying to differentiate with features like curved or bendable screens, most smart phones look the same.

What we have here is ‘digital sameness’—the idea that many of today’s digital products share similarities in design, functionality and user experience.

The web design industry has even started poking fun at itself, in a jokey-but-with-quite-serious-undertones kind of way.

Sameness, by definition, means you look the same as everyone else. If everyone looks and feels the same, how can you stand out?

Fighting back against ‘sameness’.

Calibra logo aside (honestly, that’s just ridiculous), there’s an obvious argument for sticking to conventions. Sameness—despite all its negative connotations—breeds familiarity, which makes digital products easy to use and navigate.

The more conventional an experience online, the more likely that a user will be able to find their way around the product to get the information they’re looking for.

To a certain degree, convention breeds comfort. No one wants to learn multiple sets of different rules for what is ultimately the same game.

For example, most people know that if you click on a website’s logo, you’ll get taken back to the homepage. But if you changed that ‘default’ behaviour and sent people off to a video of epic sax guy, they would probably be annoyed. Well… amused at first, but then annoyed.

So, many organisations opt for ‘familiarity’, thinking this is the only way to deliver a good user experience. If you break conventions, you risk losing customers. Better to play it safe. Don’t be too ‘creative’, otherwise people won’t know how to use your product.

Here’s the thing: it’s a false dichotomy. The idea that creativity is the antithesis of usability is just plain wrong. It is possible to be different, and to be better. This is what we’ve explained above. When you opt for familiarity and cater to conventions, there’s a strong chance your product will be usable. But an equally strong chance you’ll look like everyone else and struggle to differentiate yourself.

Proof that familiarity doesn’t always lead to usability. Remember a few years ago, almost every homepage on the web had a carousel or rotating banner? This technique became so popular that it would certainly be considered ‘familiar’, but did it deliver good UX? It turns out, no. Rotating banners are not good for usability. They annoy people.

Ah, the reason why so many companies ‘play it safe’. When you try to be novel and creative, you could end up damaging the user experience. Like having really important information in your website’s footer that’s impossible to access because you decided to add ‘infinite scroll’ as a feature within your body content. Or creating initially compelling interactions that ultimately impede on page load times.

The holy grail. Designing something novel, something that goes against standard conventions, but actually improves user experience.

Earlier in this article I referred to modern smart phones looking the same. But someone had to come first; conventions don’t appear out of thin air.

When Apple released the first iPhone, it was a huge leap forward in user experience compared to existing options on the market. Although Apple didn’t invent touchscreen technology, they made it so usable that it was almost instantly attractive to a widespread commercial audience. When you picked up an iPhone for the first time, you didn’t have to ‘learn’ how to use it. It just made sense.

Building novelty into your digital products.

The story of the first iPhone is a big one. But you don’t have to do something as epic as that to stand out.

Introducing unique elements or non-traditional ideas to your design and UX doesn’t necessarily make your product difficult to use. In many cases, it can make usability better.

By blending creativity with convention, there’s an opportunity to buck the trend of digital sameness, while retaining familiarity and relevance.

Imagine you were on a reality cooking show like MasterChef. Your challenge is to make the best omelette the judges have ever tasted.

Some of the competitors around you will ‘play it safe’ and stick with conventions, like making an omelette with cheese. They probably won’t get eliminated from the show, but they almost certainly won’t win.

Some of the competitors might do something totally experimental to try and stand out. Omelette with peanut butter. They’ll probably get booted out.

But you decide to balance creativity with convention. Eggs with cheese and Indian herbs and spices: chilli, turmeric, fresh coriander. You’ve done something different but you’ve done it intelligently, in a way that improves the tasting experience. Your dish is one of the top three. Pat yourself on the back, you’ve survived another week.

So, you want to stand out from the crowd, but remain relevant and familiar to your audience. Here are a few ways you can mitigate sameness, while ensuring your digital product remains accessible and easy to use.

Who is using your product, and why? Are they likely to be open to unconventional experiences, or should the product remain familiar? Demographics, social factors and the physical and cognitive abilities of users should all be considered in how you structure your product.

2. Take risks in the right places

With the above in mind, it likely won’t do you any favours to break accessibility guidelines or over-complicate things that might be best kept simple. But if there’s a piece of content that would benefit from a deep, engaging experience, don’t just create a bog-standard content page like everyone else. Present your content in interesting ways, like St Catherine’s School’s Life at St. Catherine’s page or Creative Partnerships Australia’s Why Invest In The Arts page.

Look at how you might do things differently (read: better), without following the crowd. You might find value in looking at similar industries or organisations around the world for inspiration. Don’t just look at what your nearest three competitors are doing. Spread the net wider.

4. Decide how different you want to be

Are you looking to emulate Apple’s first iPhone? Or can you be creative without needing to change up the foundation of your existing product? If your digital product is a website, think about ways in which you can make your existing imagery stand out more, or ways in which you can deliver real-time, in-the-moment, service to your customers, rather than having them submit a standard contact enquiry.

5. Get real users in for testing

There’s nothing like capturing feedback from the people who will use your platform. Insights from user testing can validate whether you’ve nailed the balance between creativity and familiarity or whether you’ve missed the mark.

6. Think about the most ‘boring’ elements of your current site or service

They don’t need to be boring. They can be different. Not just different, but better. If I asked you what is the most boring page on your site, what would you say? Your privacy policy? You can make that exciting, if you want to. And far more likely to be read, too.

Find ways to get people to interact with a page as opposed to just reading content. Like the ‘The Difference an Action Makes‘ page by Cotton On Foundation. Or 2XU’s Design Lab. Remember though, you’re aiming to enhance the experience, not make it harder. If it makes sense to make something interactive, go for it. If you’re just hiding text and making people click for the sake of it, you’re probably just annoying people.

Remember, usability and creativity are not opposite ends of the same spectrum. It is possible to achieve great usability by breaking conventions and doing things differently. But remember, conventions exist for a reason. Don’t break them because you think it’s ‘cool’, or because you just want to test out the latest web design trends, or because you’ll do anything to stand out from your competition.

Do it because it makes your digital product better for the people who will be using it.